This is my report for the San Diego 50 trail race. I figured it would be best to post this as a blog entry instead of writing it down in my running journal because then others can see it and it would be backed up for all eternity (I have had my blog for seven years). This will be broken into two sections. The first will be a description of the course and what I went through (physically and emotionally). The second will be about me, how I felt and what I learned for when I run the same course in the future. The race was run on January 13, 2018 at 6:30 AM (there is a 13.5 hour time limit). It started at the San Pasqual Trail head in Escondido. It is an out and back race and all on easy to moderate trails. It has about 4000 feet of elevation.

The race started right at 6:30. The race director told us that the trail was marked with pink ribbons and flags. There were aid stations every 5 miles or so. Each aid station ended up being the sections of the race for me and I will describe them like that.

The first five or five and a half miles were very flat and the trails were easy. There were embedded rocks which meant one had to watch where they were stepping. A person I was running with actually did fall. That sucked because it was within the first three miles and he was bloodied. At mile four we came to our first hill (I use that term conservatively) called Raptor Ridge. The hill was short but very steep. Not sure how long. I walked it. When we got to the top, it was downhill for a very long time. I remember this from the last time I ran it. I remembered that this was going to be the same back but up for a very long time. The trail had a lot of embedded rocks and some debris. When we got to the bottom, there was the first aid station. I refilled my water and moved on.

There is not much to talk about for the next five miles. We ran on very smooth trails through orchards. It was kind of boring but it was easy running. I was beginning to have doubts about my ability to finish at this point. The weather was warm but not hot and I was not in shape to do this. Before I knew it , I was at the second aid station and mile 10.

The path to the next aid station was actually not so bad. There were moderate hills but the trails were a lot rougher. There was also some treacherous areas that required a bit of caution as not to fall. We were running around Lake Hodges so there were some great views. But it was getting warm and there was very little shade. It was only 9 AM at this point, but I was feeling the heat. I also suffered from a little cramping. I was becoming negative. I did not see that I had completed the first ten or eleven miles but I had forty to go. I was walking a lot and being passed by other runners. I could not be sure, but I was pretty sure I was dead last at this point. I plodded on, hoping that me attitude would change. But I was very doubtful that I would finish this race. I finally arrived at the third aid station; mile 15.

I drank some water and refilled my water bottle. I had a slice of watermelon and took off. I knew the next five miles were going to suck. It started with a very flat, scenic run around the lake. The trail had a lot of embedded rocks that made the steep, short grades treacherous enough to walk. The other issue were the mountain bikers. There were a ton of them. Since I sis not want to get hit, I yielded but this made it tough to keep a pace. After about two miles, things became difficult. At this point, I was passing the damn. It started with a medium length hill that brought us to the main road. Once there, we had a long moderately steep downhill run mixed with trail and road. I was suffering. I walked a lot of it. When I got to the bottom, I crossed a bridge and then started climbing a short steep hill.

Now, at this point, I had a problem. I ran out of water and I had not hydrated enough at the last aid station. What was worse: I did not now where the next aid station was. At this point, the leaders were coming the other way. They looked awesome. I was about 15 miles behind them (frigging young whipper-snappers). I got up the hill, really suffering. I was dehydrated and stiffening up. I saw someone walking and asked when the next aid station was. He said I had about half of a mile. The good news was the rest of the trail was downhill or flat. I finally made it to the aid station, mile 20. And I was a wreck. I ate more watermelon, drank two bottles of water and filled my bottle and off I ran…er….walked. 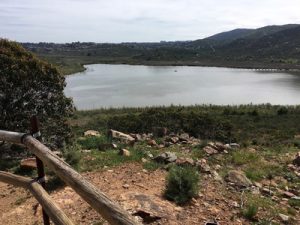 I was miserable. My legs and feet were fine (though I had some blisters forming) and I did not suffer from any chaffing. But I was tired, hot (the heat was becoming a real issue, reaching 85 degrees) and extremely negative. Compound that with stomach issues (the watermelon upset my stomach) and I was in trouble. This misery lasted for about another mile when something just snapped.  I felt better. I even started running a bit (though not swiftly). And it happened just in time. There was going to be a short trip down switchbacks into a canyon and then straight back up switchbacks out of the canyon. Though very short, it was very steep and the trails were washed out (a lot of debris). It was also extremely hot in the canyon (high eighties). I was able to run down and walk up without being worse for the wear. The final stretch to the half way point was on a road and downhill for about three quarters of a mile. That was good. What was bad was when I got to the halfway point, I had to turn around and walk up the hill I just ran down. But things were getting better. I was not sure I would be able to finish but my really bad attitude was dissipating.

I was through 26 miles. Over half way there. My next post will be the second half of race.