From October 31 through November 2, the Mexican people celebrate a tradition called Dia de los Muertos or Day of the Dead. The matriarch of the family set up an alter with all those the family has lost. It was beautiful. Josie, seeing me look at it told me to get one of Joe’s pictures and set it up.  I had a bunch from his funeral and had to pick. I found a nice one with me in the background. I wanted one where it was just him.

I set the picture up and felt like part of the family. Mom even moved the picture so that it had a prominent position on the alter. I walked back into my room and cried. Not the seething tear-storm I had in the past. Just some tears running down my face.

This was not the only time his picture found its way on a Day of the Dead alter. Jenny and Mauricio had one too. Mauricio is Mexican and Jenny just follows along. I thought it was a very nice gesture. It actually did make the bond between him and me feel like it was there. And it reminded me, like I would forget, how much he meant to me. I have his ashes around my neck and I reach for it to make sure it is there everyday. I always thought it was just a reflex and never thought it was obvious. Josie said she has seen me do it all the time.

The Dia de los Muertos is a special day for the Latin American people. It is a day that is used to remember all those we have died. And, if remembered, the dead have life in our world. That is a very simplistic look at the holiday. It is the actual premise from the Disney movie, “Coco.” But, you know what, it’s comforting. It falls at the same time as All Saints Day, the Catholic holiday that occurs the day after Halloween and is meant to celebrate the dead. At first, it was to celebrate the dead saints (an oxymoron, all saints are dead) but I think it took on another life in my catechism. We all have saint names so I was taught to think of someone close to me that died and his associated saint. That connection made me remember the good things of those I lost. American culture actually brought Dia de los Muertos to coincide with All Saints Day (it was originally celebrated over the summer).

Even literature reminds me that agnostics think this way (though I hardly think the spirit was the subject matter of the piece). Jean Paul Sartre wrote in the play, No Exit. If you are a reader of my blog, you have heard that title before (and pretty recently). In the play, three people are in Hell, discussing how they got there. Each has a way of seeing life on earth but only if they are being thought of. As people begin to forget about them, their view of life begins to dim. Now, this is a very cynical look. Definitely now as happy has Coco. But the idea is the same. 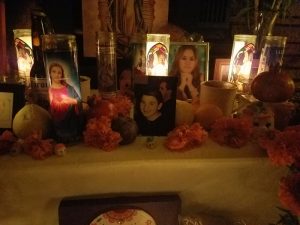