This post could be bad. In the near future, I smell the words “bigot” and, well, maybe, “sexist.” I guess. Doesn’t really matter. Being a straight, white male already makes me those and racist so I might as well say what I am thinking.

Vermont had its gubernatorial primaries last week. Of course, the Republican race was simple. The current governor won the race quite easily. But that’s not the story. The story is the candidates for the Democrats. It is absolutely crazy. So let’s take a look.

There were three serious candidates for the Democratic gubernatorial race: Cristine Hallquist (A transgender woman [?]), two other “normal” Democrats and Ethan Sonneborn, who is a 14 year old kid that took advantage of Vermont’s law lacking age restrictions for running for governor. Well, luckily, the fourteen year old lost (but he did get 5000 votes). But Cristine Hallquist did take the nomination. That’s right, we may have our first transgender governor. Here she is, in all her glory, on CNN after the election:

Ok. There you have it.

Now, I don’t care that some guy who wants to be a chick wants to run for governor. But this brings up a few problems I see about society today. The first issue is that it is more important who is running than whether that person is qualified or not. I heard that a transgender won the Democratic ticket for governor but that was it. Not his name of even his preferred gender. This wasn’t the only time this week. A Muslim woman won the Democratic nomination in Michigan. Again, no name was mentioned. 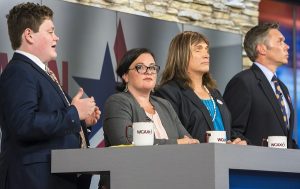 This is the problem with the Left and identity politics. Quality does not matter. Whether these people know the issues or have a good solution does not matter. What matters is the group they belong to. Heck, even their names don’t matter.

Of course, the Left does not take any of that into consideration. Look at the above interview with Hallquist. That “journalist” from CNN, Don Lemon, really took the wood to Hallquist, asking such hard hitting questions as, “Is this a victory for the transgender community?” and, after he pointing out that he was a CEO of a “cooperative” electric company (in other words, a state funded, small and bankrupt business which is suppose to add to Hallquist’s “experience”), “Why did you go into politics?” That was about the gist of the entire interview. God forbid Lemon ask a question about, oh, I don’t know, his political views. But that’s why Don Lemon is so high on the CNN roster and why most of the country believes that the news they hear (especially from CNN) is “Fake News” (a term in which I really hate).

Though I hate the term, “Fake News” is right on. Everything is about agenda and not about qualifications. Because this guy is a transgender, that’s what matters. Nothing more. There was nothing about why he should be elected or anything about his policies. Donny-boy just asked him about his victory as a transgender.

Well, reality hit hard the next day when he was interviewed by another CNN commentator (notice, none if these interviewers are from Fox, the Daily Wire or Breitbart). Another CNN host questioned Hallquist about his policies and that of the Democratic party leaning closer to Socialism (he will probably lose his job because he is insensitive). What a shock, Hallquist did not know how to answer. Take a look:

There are two things I want to point out here. The first is that this guy is obviously a little delusional. OK, I sugar-coated it. He’s crazy. This is not a normal human being. This is the kind of guy that gives transgenders a bad name (though I have yet to meet one that gives them a good name, though I am sure they are out there). He is a man wearing a dress. He looks like a clown. He is not only crazy, he’s stupid. This guy has no business being a governor, running a state (albeit a small one). How can a man who is trying to get into politics dodge a question about socialism by saying he “doesn’t like to use labels.” What?! At least he finally admitted that he does not know what socialism is (as he describes his policies that mimic socialism). 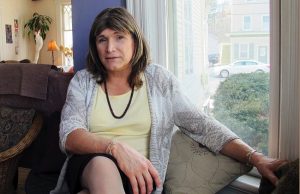 But that’s not the worst of it. This guy is dumb and nuts. Probably is so dumb and nuts he doesn’t realize he’s dumb and nuts. But the media (in this case CNN but I’m sure they all did it) are embracing this guy as if he is the second coming of Twinkies. His identity means everything to the media. And the fact that he does not know the issues and appears to be off does not seem to matter in the least.

Folks, this is why Donald Trump is in office.Political correctness, social justice, identity politics and inter-sectionalism has led us to this. It is stupid and people are sick of it. The Democratic party, who is going further to the left at every opportunity, should be prepared to take heavy losses in the future. Because most people just can’t stomach the garbage they are pushing.

Thanks to:
CNN.com
YouTube.com