Josie and I are fighting. I can’t say why but its pretty serious. So I’m alone tonight (probably will be for a while). I have several movies on Netflix, which I planned to watch with her, but we never got around to watching them. Well, her loss. I am going to watch them now. And the first movie is one that she did not really want to see. It is called Room and was released in 2015. It stars Brie Larson and Jacob Tremblay. It was written by Emma Donoghue and directed by Lenny Abrahamson. It received a 94% fresh rating from RottenTomatoes.com.

I didn’t see the trailer or read anything about this movie. I just thought it sounded kind of strange and had surprise after surprise. It is a drama. Click on the link if you want to watch the trailer:

The movie starts ominously enough (that’s a big word so you know I’m leading to something). There is a small, dirty room with a single skylight. There are no windows and the door is locked. There are two people: a five year old and his mother. They never leave, have to ration their food and even have to exercise in the small space.

Now, at this point, I had no idea what was going on. Was there some nuclear war and they could not leave? Was there an alien invasion and they were in hiding (much like a movie I am going to review later)?  I just don’t know yet, 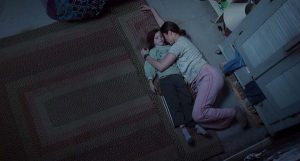 Well, while her child was sleeping in the closet (as per some schedule), a man came into the room. They talked for a few minutes and then proceeded to have sex. And that’s when ithit me. This was not a sci-fi movie. These people were being held against their will and the mother was a sex slave. Wow! It turned out that the girl was kidnapped seven years prior, The boy is her rapist’s son and she is the mother.

Fucked up enough for you yet? It gets worse.

The boy has never been out of the room. And mom was lying to him about that. She told him that the world was that room and there was nothing on the outside (in fact, there was no outside). When mom decided it was time to try to escape, she had to explain to her son that there was a world out there. You can bet that didn’t go well. But she came up with a plan and they got away. The rapist was caught.

But that’s where the story begins. You didn’t things were going to be, “happily ever after,” did you? 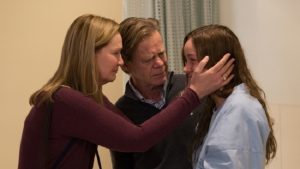 The mood of this movie is very heavy. Even when rescued, the viewer could feel the suffering, stress, confusion and depression the characters were going through. The mood was magnified by the outstanding acting. The kidnapper was the sociopath you’d think he’s be. The child was as lost and scared and irritating as you’s expect he’d be. Ma was desperate and guilty as you’d think she would be. Even the parents displayed emotions that were conflicted and guilty. William Macy played Ma’s father and, though he was only in the movie a few minutes, his role was especially heartbreaking.

It was very hard and uncomfortable to watch. Which made it a much better viewing experience and a topic of future conversations. If there was a movie I would compare this to, it would be “A Ghost Story” (which I review in February of 2018). It was just a really emotional, heavy movie. A thinker. One should just make sure he is in the mood for it. 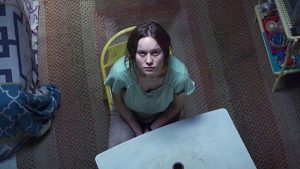 This is a movie one watches once. But it is definitely worth it. There is no visual violence or sex, but it is there. This is not for the kids because you don’t want to have to explain what is going on. I give the movie a 4 out of 5 stars.