Josie and I went to Countryfest in Del Mar on Saturday. It was actually pretty fun except there were a lot of drunk people and I spent $30 on two drinks. That is $5 less than the tickets. That was not great. The festival was good. I am not a fan of country music (Josie loves it) but I am a huge fan of concerts. We ended up leaving an hour early. But that is not what this article is about. But it is why I ended up watching a Netflix movie…alone. Josie’s kids were at her grandmother’s house. If we had stayed for the whole show, they would have stayed at their grandmother’s place and Josie and I would have made our own entertainment. Instead, we picked up the girls and she slept with them and I ended up watching Netflix on a Saturday night…alone. 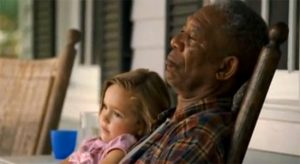 I decided to watch a movie I had never seen before. The movie was Gone Baby Gone. I had high hopes for this one because of the star power. Casey Affleck starred in this movie and I still spends nights thinking about the last movie he starred in called A Ghost Story (I have a review of that movie in an earlier post). Along with Affleck, the movie stars Michelle Monaghan, Morgan Freeman and Ed Harris (the last two are also among my favorite actors). Unfortunately, I might not have chosen this movie if I had see that it was written and directed by Ben Affleck (Casey’s brother) but more on that later. The movie was released in 2007.

The movie is about the epidemic of child kidnappings in Boston. The police are doing all that they can do but they are overwhelmed. During this epidemic, a little girl, Amanda, is abducted. Her mother, whose mothering skills are rather dulled by her drug use, pleads to have her daughter returned. With the lack of a police response, the girl’s aunt hires a private investigator, Patrick Kenzie (Affleck) and his girlfriend/partner, Angie Gennaro (Monaghan). The police captain (Freeman) agrees to allow the two to investigate. But they would have to work with Boston’s best detective, Remy Bressant (Harris) and his partner. The P.I.s find out that Amanda’s mother was a drug mule for a rather unsavory drug kingpin. Apparently, the mules stole a lot of money and the drug kingpin was pissed. The kingpin told the investigators that he had nothing to do with the little girl’s disappearance because he did not deal with kids (obviously due to his hypersensitivity). All of the investigators were unconvinced. They decide to create a exchange with the kingpin; the money for Amanda. Things go really wrong. The kingpin gets killed, the little girl is thrown into a river and, supposedly, drowns and the movie is over. Right?

I have one word for this movie: Ugh! There are a bunch of problems with this film. I am not surprised it never made it.

First, Ben Affleck was the writer and director. Enough said. Ben Affleck couldn’t act, write or direct his way out of a paper bag. I know, I know. He helped write and starred in Good Will Hunting. Here’s a news flash for everyone: that was Matt Damon’s doing. He was the smart one. Hell, Affleck is from Boston and his accent sucked. The fact that this movie was considered a “neo-noir mystery drama film” should tell you that Affleck was working really hard to be more intelligent than he really was. I mean, come on, this guy thought his role in Gigli was a good idea.

The next huge error in movies is not getting to the point. Twists and turns are not bad things, but get to the point. Don’t make a movie longer than it should be. Writers shouldn’t spend and hour and twenty minutes on a plot just to throw in a twist. Then, spend thirty more minutes on that twist just to throw another twist in again. And then spend ten minutes on that twist just to come up with an inconclusive ending. That sucks for anyone watching a movie.

Finally, and the biggest issue, I should not know the “bad guy” within the first twenty minutes of the movie. But I did. It kind of makes all those twists and turns rather worthless and a waste of time. I think a lot of this has to do with over-developing some characters and forgetting to develop others. Harris’ character was really well developed. The viewer could tell he had some baggage. But Monaghan was so underdeveloped, I actually forgot who she was. Her character was not important at all. Here’s the secret: always develop character equally. When one is more developed than another, that character sticks out and the viewer will know he/she will have an impact in the end. That’s where this movie failed. Well, and having high profile actors did not help either. Freeman had to have a much bigger impact on the movie or he wouldn’t have taken it. 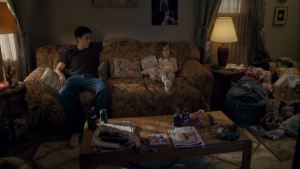 Now, I finished the movie so there had to be something good about it. And there was. The acting was phenomenal. Affleck, Freeman and Harris were awesome as one would expect they would be. The drug-addled child molesters were scarier and creepy beyond belief. I hated the uncaring mother and felt the conflict of the guilt-filled uncle. The movie was really well acted. In fact, the acting saved this film (sort of). But the great acting couldn’t save it.

This is not a “first date” movie or a kid’s movie. The language is strong and there is some strong violence. If you’re bored one night and have seen everything on Netflix, go for it. I give it a 2 out of 5 stars.