It has been a tough weekend for my Netflix decisions and I was hoping a good old fashioned, disaster film might fix that! Yeah, well, no. The Movie I chose is called, “How It Ends.” If you want to take a look at the trailer, I included it below:

This movie was released in 2018 by Netflix. It was written by Brooks McLaren and directed by David Rosenthal. The movie stars Theo James, Forest Whitaker, Kat Graham and Grace Dove (though, honestly, Whitaker and James were really the only important characters). The movie received a 20% on RottenTomatoes.com.

The movie is about a young lawyer named Will (James) who is currently in Chicago on a case. He is engaged to his pregnant girlfriend, Sam (Graham). While he is in Chicago, Will decides to visit Sam’s parents, who he does not have the best of relationships with. After a very contentious dinner, Will fights with Sam’s father, Tom (Whitaker) and gets kicked out of the house. The next morning, Will is talking to Sam on the phone when a very strange noise happens in the background and Sam becomes scared. The phone connection drops and Will is unable to get back in contact with Sam.

Will, afraid of what is happening and no one knowing what has occurred in the western part of the United States, goes to Sam’s family where Tom is preparing to drive across the country to find his daughter. The two suspend their anger at each other and away they go.

That’s about the only part of the movie that made any sense. And, guess what? You won’t no anymore at the end. This movie was terrible. Will was made so helpless, he was annoying. Tom was so resourceful, one thought he was a Navy SEAL or something. Everyone was angry for some reason. The “adventure probably shouldn’t have been too eventful but the two were constantly being chased by people who was pissed off. In the middle of the film, the two picked up a Native American girl who was a mechanic just in case their car broke down. This kind of made sense and I expected her to be an important character. But, fifteen minutes later, she was gone.

But that’s how the whole movie was. Nothing made sense. The ending was the worst. Through the entire film, the viewer waits to find out what was destroying the west coast of the United States. Was in a nuclear war, earthquake, meteor, super volcano? Yeah, well, save your time. You never find out. The movie ends with Will and Sam driving as fast as they can away from rolling smoke from…well…wherever. 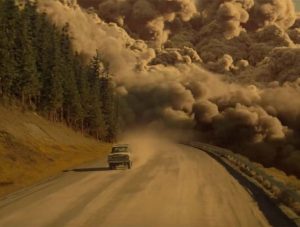 Absolutely terrible. Don’t see it. I rate it a 1 out of 5 stars.