I guess we have a new political term this week. And that word is civility. Of course, that is not a new word but its one the politics hasn’t known for, at least, twenty years. For those who do not know what civility means, Merriam-Webster dictionary defines it as, “civilized conduct especially in politeness and courtesy”. So we are missing civility in politics (duh!). But I think this can be dangerous and I am having trouble believing we can get back to the way things were. I may be cynical on this subject but I don’t see this ending well. 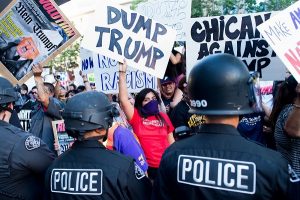 This problem is a non-partisan issue. Groups from both parties are doing it. In fact, this weekend, both left and right were attacked (though one side seems to do it a little more than the other. I’ll let you figure out which). Things need to change on both sides. But let’s go over what happened.

This weekend (not sure when) Sarah Huckabee Sanders was having dinner with her family at a restaurant called the Red Hen. The owner, after consulting with her staff, decided to kick Sanders out of the restaurant because she worked for the Trump administration. Sanders left and went to another restaurant. I think this is a bad business decision but she has a right to not serve anyone she doesn’t want to serve. The problem is that Sanders went to another restaurant and was followed by a mob, including some of the employees of the Red Hen, and were harassed at that restaurant. Now that’s wrong. And that wasn’t the only Trump official or supporter that was harassed when in public on their own time. But, to be fair to my democrat friends. The same thing happened to Jim Acosta in a Trump rally last week. You can look at it below:

Now I think Jim Acosta is a low-life, grandstanding, biased-acting-like-he-is-impartial piece of human filth too. Heck, I think CNN is a garbage network wth radical left leanings that acts victimized every time the President or any of his cabinet point it out. But Acosta is still part of the press (albeit one that is hardly watched) and had a right to be there. He got and didn’t deserve the harassment.

But it didn’t stop there. Enter Maxine Waters, a democratic congressman (SJWs, women can be “congressmen” too. I don’t feel like adding the two extra letters) from California. The only thing she has done for the last year and a half is demand that Trump get impeached and cash her pay checks. She not only did not condemn the harassment of Trump officials, she encouraged her followers to continue harassing the anywhere they see one. You can hear what she had to say below:

Now, to put it nicely, Maxine Waters isn’t the brightest bulb in the chandelier. To put it more accurately, she’s an idiot (I have yet to see a politician from California that isn’t). She refuses to deal with the Trump administration and shows here that she will do anything to prevent any of his policies. But this isn’t new and not the biggest problem. She has a following and they are just as misguided as she is. That makes her words dangerous. What’s really scary is that she is not the only one advocating this.

This country’s politics are so polarized that discussions about important topics, that should be discussed reasonably and logically, are never discussed and never solved. Our politicians, who should be the models of civility, are now becoming, and encouraging, the mob mentality. The danger comes when those who are unstable and “passionate” about their political issues, decide to take matters in their own hands. That’s where the violence comes. That’s when we start seeing the violence like that in Charlottesville and at the baseball practice where Steve Scalise was injured. Each incident of political violence just further polarizes the Left and Right.

I am just not sure civility can be brought back. It would take both sides to make concessions and bend. But, as we see on the news and social media (Twitter is a mob itself), no one is willing to do so. From there, we may be looking at an ideological civil war. Sneaky violence that attacks groups of people with a political point of view by someone with the opposite point of view. It will be a form of domestic terrorism. Fringe groups like Antifa and alt-Right groups will see an increase in membership and a much larger public presence. As a result, violence and death will ensue.

I post this a day after a mass shooting at the Capital Gazette newspaper in Annapolis, Maryland where five people were killed. Of course, I thought it was some alt-Right nut job but I did not add this section until I new. But that did not stop an editor at Reuters news. Rob Cox posted the following Tweet just after the shooting:

This is what happens when @realDonaldTrump calls journalists the enemy of the people. Blood is on your hands, Mr. President. Save your thoughts and prayers for your empty soul.

I mean, wow. No one even knew why the guy attacked yet, but there it is. From someone who is suppose to remain neutral and reasonable. Someone who suppose to feed us our news in an impartial way. He just condemned the President as having no soul. He deleted the Tweet because it was found out that the murderer killed those people because he had lost a defamation lawsuit and he was angry. Great analysis, Mr. Cox! Better update your resume cause Reuters is pissed.

So, how do we solve this problem? Can it be solved? As a group, it cannot. The only way civility can be brought back to our society is if each person decides to listen, understand and, if necessary, agree to disagree. I have debates all the time, even with family members and we have yet to kill each other. Why? Because we listen to each other and debate. Sometimes, one of us will even admit we’re wrong or don’t know something. But it always works out.