Josie has never run a marathon. I thought this would be a huge missing piece in her life so I decided to sign her up for one. I also though it was going to be a good idea for me to move forward and try to get myself back to a rather normal life. So I signed her up for the Rock N’ Roll San Diego Marathon. A month before the race. She was not working out as much as she needed but I have always been a impulsive guy and she is too stubborn not to finish (and finish well) so I figured we could do it. 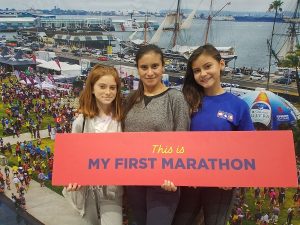 We spent the next month working out. We did a 17 mile trail run with very little problems (though I did hurt my foot). But we were good. We were ready to go. But the reason there is an update is because of what we (yes, I said “we”) went through the day before the race.

This race was going to be tough both of us emotionally. This was the one year anniversary of Josie’s father’s death. She was suppose to be in Mexico, but I signed her up for this race. And, of course, this was the first race since my son passed away. I taped my favorite pictures of Joe on my bib, making this race about him: a black and white photo taken at Nikki’s wedding and one of him and me after I ran the L.A. marathon. Josie is a little better at emotions than I am. she kind of just keeps quiet. Me, I lost it and took it out on her. She went to bed. Later, she reminded me she was going through stuff too. I apologized the next morning and, after a bit of running, she began talking to me again.

We didn’t have to wake up too early. Josie’s brother would take us to the starting line. We did have to walk a little over a half mile to get to the starting line. I realized my foot (which was injured all week) was still bothering me. This could be bad. Josie forgave my temper tantrum. She was talking to me. Once we got to the line, we had to wait forty-five minutes before out corral was called. I can’t believe I was worried about getting to the start line on time. We started.

Let me explain something. I ran the race two years ago and it was awesome. We ran through the city. Old Town, Sea World park and the 163 freeway (that sucked, but added to the experience because everything else was so cool). The course was changed and not for the better. There did not seem to be a single downhill in the entire race. Worse, it was really a boring race. Nothing to look at, no views and not as many bands as I thought there would be. Heck, there weren’t even any transvestites when we passed through Hillcrest (that’s San Diego’s West Hollywood). The only neat part of the course was a mile long stretch that was lined with American flags and the pictures of all those that died in combat. It was very inspiring. 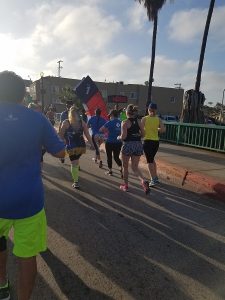 Josie was in a great mood. She was singing even though she was in pain and it was very hot. Her forgiveness was in full effect and she was very talkative. The only thing that was rather annoying was her headphones. She likes to blast music and cannot hear a thing I say. What’s more, she gets mad at me when she cannot hear me. Go figured.

I was not in as good of shape. My left foot was killing me. I was hurt all week and, I thoought, I was better. At mile 10, I knew I was in trouble. I sucked down some Aleve nd, by mile 19, I was fine.

Now, you would think getting to mile 21, the end would be in sight. We should be thrilled and pumped to get to the finish. Well, that was before Josie knew we needed to spend the next four miles going uphill on the 163 freeway. This part really sucked. The asphalt was hot, it was straight up hill and there was no shade. You could imagine how I felt when I found out, at mile 24, that there was an active shooter around the finish line.

Yeah, not good. The last thing that I wanted to happen is running 25 miles and Josie not getting a finisher medal. Well, It turned out to be nothing. In fact the story was rather funny when I read about it the next day. I’ll include a link to the story at the end of the post. 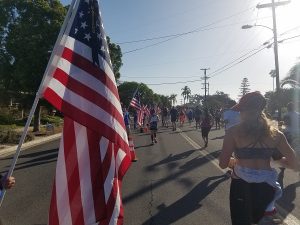 You could tell Josie was miserable. She did not care. She got angry when I took her headphones out of her ears and did not seem to care about the impending terrorist attack. She was not even phased seeing the ten SDPD police cars speeding up the freeway with sirens blaring. What made things worse is we could not confirm a thing. There was nothing on the news, I could not get a hold of someone and no one else had heard anything. So, we just kept going and suffering.

Finally, we got off the freeway. We had gone twenty-five and a half miles. We were going to finish. And I remembered Joe would not be at the finish line to take a picture with me like he did at the LA marathon. The emotions I had the day before were flooding through again. I am pretty reserved. no one could tell. And I did not tell anyone. This was just for me. 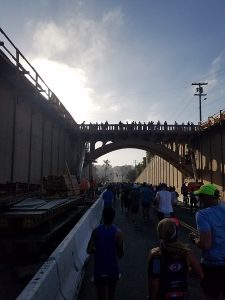 We finished. Josie’s kids met her at the finish line. I was miserable, in a ton of pain. But that was numbed by the fact we finished. It was a good race, not fun, but good. I won’t do it again unless they change the course. Josie is already looking forward to the LA and Carlsbad marathons.

I’m not doing so well. I was hoping this marathon could be one of those plateaus that would bring me closer to that catharsis I needed to be able to move forward. It didn’t. I miss him so much.

Oops. I forgot the most important picture of all.

Here’s the link for the “active shooter” situation. Apparently, the only active shooters were San Diego police.