Yes, I am actually going to write about something other than my son! Yay me! But this story really ticked me off earlier this week. I was going to write something then. But, I sat and thought about it and think I have a lot more sane of an argument now.

The media was pretty non-partisan about it. Everyone knew she was a good woman no matter what they thought of her husband’s politics or time in office. Twitter was filled with wonderful words and tributes.

Then came Randa Jarrar, an English “professor” from Fresno State University. She went on a Twitter rampage, cursing Barbara Bush and elated that she was dead. And she hoped her husband, who started the first Iraq war, was suffering from his loss and could quickly follow her. Well, she’s a real piece of work overall.

Here is a quick video to show the class of this “professor.” Amazing that this garbage can hold a job or has the highest of college degrees for she sounds pretty dumb. Take a look:

As you can imagine, she was blasted by anyone who saw her posts. Even the news media, who have no love for George Bush, were screaming for her to be fired. So what does Jarrar do? She Tweets that she is tenured and can’t be fired, basically daring Fresno State to do something about it. This causes more rage and more calls for her firing.

Now, let’s all calm down and look at this reasonably. Farrar is doing something that she is allowed to do: exercising free speech. Because I do not like it, it is vile and ugly does not mean she cannot say it. She should be allowed to say it and shouldn’t be fired simply because people actually saw it this time. As far as I am concerned, the best way to deal with this type of grandstander (she’s an English teacher and probably know less about politics than most) is to just ignore her. Don’t put her in the spotlight. 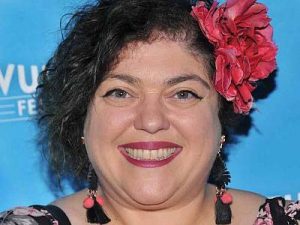 I don’t blame Farrar for not being fired, I blame Fresno State University and the college system as a whole. Let’s face it, this “woman” has been talking like this for years. It isn’t like she just decided , one day, to go off. Why wasn’t she fired the first time she started showing her true colors. This language is obviously not the kind of language you want someone who is teaching our young to hear (never heard half that language come out of Chaucer’s Canterberry Tales which is what English professors should be talking about). Why didn’t Fresno State fire her way back?

This also leads me (and should all of us) to question the tenure system. Why can’t this woman be fired? Throughout my career, I have achieved many credentials and achievments, but if I spew this trash at one of my customers, I’m gone. I think we need to get rid of that system. If someone violates the ethics and morality clauses of the school, they should be able to be fired (by the way, she actually can be fired as tenure is not bullet proof).

So it is not on her the blame should be placed. She has a right to preach hate. It’s in the Constitution. Just don’t listen to her. By the way, I think she is an ugly, vile, cowardly (she privatized her Twitter account when it got too hot) fat piece of human waste that should experience a life of pain and agony and suffer through a long, painful and lonely death only to end up in the last ring of hell in a block of ice under Satan’s butthole (that’s  Dante. I’m an actual English major). Don’t hate me. I, too, was expressing my Constitutional right of free speech too.