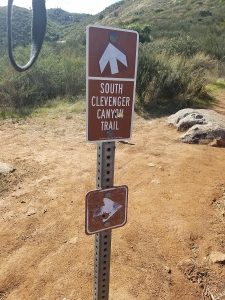 Josie and I decided to go on a hike on Sunday. This turned out to be easier said than done. I thought Josie was going to kill me (though none of it was really my fault). First, I wanted to go on the Orozco Truck Trail, a 14-mile trail through the hills of Ramona. It turned out that we needed to get a permit for this trail and we did not get one (Really?! $4.32 to walk?). Fail #1. The we went to the North Clevenger Canyon Trail (about a mile away). We started the hike, I was a little tentative about it. It got a very low rating on the All Trails app because the trail was not kept well. Let me put it this way: I ranked it low too. We went half a mile and could not find the trail.  Fail #2. 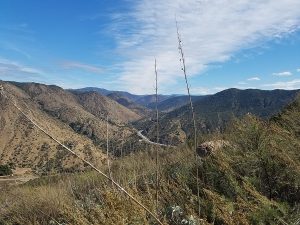 We had one more chance. The South Clevenger Canyon Trail was a mile away. It was our last chance. If this one was a bust, we would be heading home. Luckily, we found parking and off we went. The trail was narrow and rather rough. Shrubbery lined the trail. This was fine for me but Josie was wearing short leggings and she was a little afraid to run into poison oak (there was none). 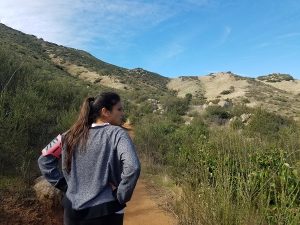 The first half mile proved to be a bit challenging. It went up and up. In fact, our car looked like an ant when we got to a fork in the trail. There we met a guy named Casey and his family. He told us that if we went up, we would get to the peak but it was going to be straight up. If we decided to go down, the trail would have a lot of shade and was longer. It would be pretty and an easier hike but no views. I wanted to go to the peak so off we went after drinking some water (it was hot). 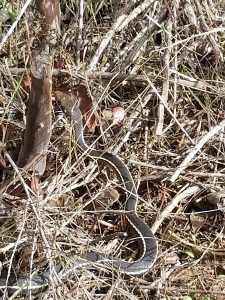 Josie led the way up the narrow trail. While walking behind, I did a little jump. I stepped on a snake. It was a little Garter snake. Nothing dangerous. Spring is here. I told Josie and she flipped out. You would have thought it was a boa constrictor or something.  She has an extreme fear of snakes. We looked at it. I thought it was dead because I stepped on it. It was not big, maybe two feet. I finally touched its tail and off it went. Josie yelled. I took the lead but she was paranoid the rest of the way. 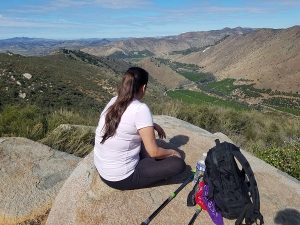 Now, our area has a lot of snakes, especially rattlesnakes. I told her that she was going to have to get used to them if we were going to hike throughout the year. Because I love trail running, I have seen my fair share of rattlesnakes (even had a couple take a swipe at me) and knew that they wanted nothing to do with people. Most of the time, they slither away when the see us or are asleep on the trail because the sun warms the dirt and they are not paying attention. But knowing this did not calm her much. Every time I hesitated for whatever reason, she thought I saw another serpent (truth is, I did see another garter snake but decided not to say anything). 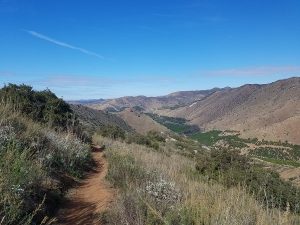 The hike up was short but, when we got to the top, it was beautiful. It only was about a mile and a half to the top (about three miles total) but we did get a decent workout because it was straight up hill. Though it took us a while to find this bugger, it was worth it. 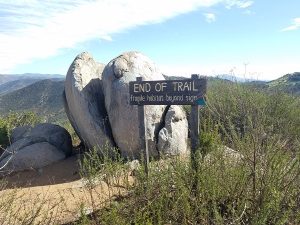