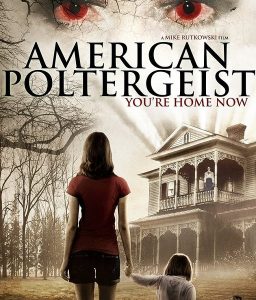 You even watch a YouTube video and know something REALLY bad was going to happen? Something that was really going to upset you and make you wish you had never seen it but, for some reason, you just can’t take your eyes off it? Then, when you finally get through the whole thing, you just found it worse than you thought it was going to be? No? Well, then let’s look at my next movie review and maybe you can experience that phenomena.

The movie Josie and I decided to watch on Netflix was called American Poltergeist. The movie was released in 2015. It was written by  Nicole Holland and Mike Rutkowski. It was directed by Mike Rutkowski. It starred Donna Spangler, Simona Fusco and Nikole Howell. There were more but I am pretty sure the acting careers of everyone involved is probably over. Movie is not rated (I think it only got screen time in the Philippines) and got a whopping 3% on RottenTomatoes (and that was higher than I thought it would get). 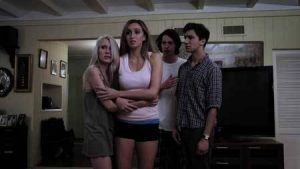 The movie was about a group of college students renting a house from some very odd old lady who had obviously gone through a ton of plastic surgery. Right away, the kids start hearing strange noises, doors opening on their own and images of a woman walking around wearing a turn-of-the-century outfit. They also are experiencing hallucinations and are having nightmares. Things they had never had before coming to this creepy house. So, naturally, they stay. It turns out the house belonged to Lizzie Borden and her ghost starts to stalk the kids and kills them one by one. 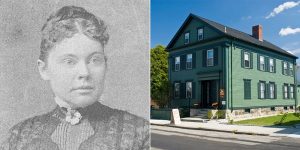 The first thing you might be asking is, “Who in the hell is Lizzie Borden?”. Lizzie Border was the child of Andrew Borden and the step daughter of Abby Borden. They lived in Fall River, Massachusetts at the turn of the Twentieth Century. The family had been fighting about money and things apparently came to a head one day. The police found Andrew and Abby chopped up with an ax. Lizzie was arrested and put on trial but was not convicted. She lived free until she died at the age of 66. No one ever looked for the murderer (they believed Lizzie did it) even though there were several other suspects. To this day, there are still debates about who killed Andrew and Abby. The trial was as big as the O.J. Simpson trial at that time and was the genesis of the famous rope skipping song:

Lizzie Borden got an ax
And gave her mother 40 whacks
When she saw what she had done
She gave her father 41.

Mom only got whacked 17 times and dad got it easier, getting whacked 10 times but it is a catchy rhyme. With that being said, this movie was no where near being historically accurate. The house is a museum now. No one is living in it. Lizzie looks 7 feet tall in the movie. She was actually only about 5’4″. Not to mention, Lizzie would have never had any direct descendants (as the movie concluded) because she and her sister never had any children (Oops!). So, just knowing the history, one will know the movie is dumb. 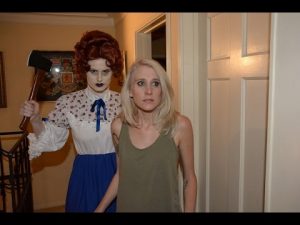 The acting was TERRIBLE. My daughter’s third grade Christmas play had better acting. It was so bad, I was hoping the characters would get whacked.The film looked like it was filmed with an iPhone (iPhone 5 not X). I had no idea why things were happening. heck, even something as simple as cooking hamburgers and hot dogs was screwed up (how are nine people going to share four hot dogs and hamburgers?). It movie was really bad. 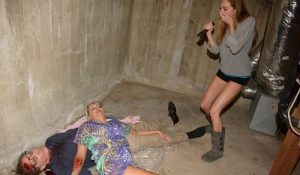 But that’s why you need to see it. It was so bad, it was funny. Josie and I never turned it off because we thought it could not get any worse and were surprised when it did. And it came with the Netflix subscription so you should take a peek. There is some cussing and a little violence (very little). Not for the kids.