Well, it has been a while since I had a post but that’s because I went on vacation. Actually it was more of a “stay-cation”. I stayed at home and slept a lot. I did put in a lot of exercise but I did take it easy for the most part. That included not keeping my blog up. But, this week, I will make up for it. Because I had five days of complete relaxation. But the sixth day, I worked like a dog. 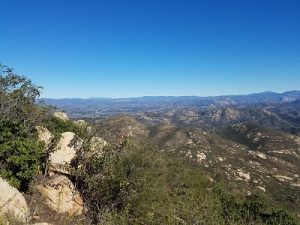 On Saturday, Josie and I went Christmas shopping. I was able to get most of mine done. I still have a bit left, but it will have to wait until my next paycheck. Josie finished up shopping for her kids. At the end of our day, I stopped off at Big 5 sporting goods to pick up a backpack and that’s when I saw it: A sale on hiking boots. Almost half off what we would normally spend. I had to do it. I bought a pair for myself and a pair for Josie (Merry Christmas). I bought a backpack (also to be used for hiking) that was also on sale (50% off) AND Josie had a coupon for $10. We scored!

So, what better way to break in a pair of hiking boots than to go on a hike. And that’s what we did. We decided to go on the Iron Mountain trail in Poway, California. This trail was six miles with twelve hundred feet of elevation gain, so it would not be too steep. The catch was that the trail would have a moderate difficulty rating, which was a little different from the past trails we have been on. 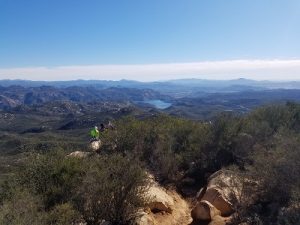 We started at 10 AM and drove about forty-five minutes to the trail head. I downloaded an app to my phone called Alltrails to get the directions and get more information about the journey. It is a great little app that hooked directly into Google Maps and gave us exact directions to the trail head.

The day was perfect. Cool but not cold with the sun brightly shining. There was a slight breeze. We were not the only ones that thought about a hike because the trail was crowded. Hikers, runners and dogs were enjoying the day. The trail appeared to be very easy at first. Very soft hills with a dirt trail that was tightly packed. That is, until we got through the first mile. Then we found out why the trail difficulty was deemed moderate (there are only three levels. Moderate is the middle).

The trail turned out to be quite rocky. Josie forgot to pick up her feet at one point and almost tripped. Our boot were far heavier than we were used to so picking up our feet took a little bit of effort. But we were both happy we were not using running shoes. We would have torn them apart. The views were very nice and there was lots of vegetation.

After about ninety minutes (we only stopped once for water) we got to the peak. There, we were treated to a great view all around the area. Without really noticing it, we had put in some exertion. My face was very salty (sweat) and my shirt was wet. But the cool weather hid any exertion we may have felt (though Josie had a hard time getting up after sitting down). It was a great hike. 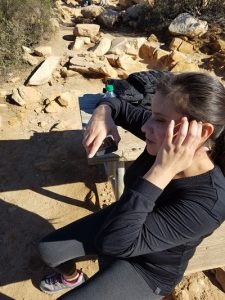 And how did we do with our new boots? What damage had we taken during the six mile break in process? Well, surprisingly, well. Our feet were very sore. The boots were heavy and did not conform to our feet (I think a few more hikes may be necessary to completely break them in). We also both wore short athletic socks. The heel flap of the boot was rubbing against our Achilles area, which was uncomfortable but did not cause blisters. On the positive side, we did not get any blisters and they really helped with the rocky terrain. The new boots were definitely a success. And the price rocked too!

Below is my GoPro video of the trip up (sped up, of course). Enjoy!