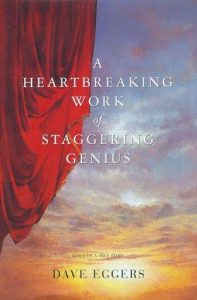 I have decided to read the 100 books you must read before you die from the Amazon reading list (to see the list, visit my website listed below). Needless to say, I am not interested in the subject matter of some of the books. But I know that does not mean I would not like the book.

Well, The Heartbreaking Work of a Staggering Genius by Dave Eggers is proof that I sometimes do not know what I will like (though I really do not like the title. Do not expect me to write that monstrosity again). The book was published in 2000. The best way to describe the book is a fictional autobiography.

It is about Eggers when he was just twenty-one years old. He has an older brother and sister and a younger brother. They were the typical Midwestern family.  Except both parents were terminally ill and died a month apart. The eldest brother had a career and family and lived in the east and really could not care for the younger brother (named Toph). The second child, Beth, was a full time law student and could only care for Toph part time. That left Dave, the 21 year old, free spirit with a high sense of responsibility, though maybe a tad entitled. The story goes through the next ten years or so of their live while living in San Francisco (a pretty strange place as it is).

Portrait of Dave and Toph

This is not a straight forward, heart-tugging story. I was not interested in reading it because I did not feel like being depressed. But it was anything but a depressing story. I could tell it was going to be a very interesting story during the lengthy acknowledgements section and the how-to-read-this-book section (he actually encouraged the reader to skip through the long-winded diatribes he would go through. Do not do that though). The first three quarters of the book are entertaining and funny. It really felt like life as seen through that of a twenty-one year old who was experiencing the selfishness of wanting the freedom of youth with the man who needed to be a parental figure to a seven year old and the conflicts that arose from it.

The end of the book, I felt, was heart wrenching and made the book hard to put down. Though he never expresses it throughout the book, you can see that the main character (Dave, but he remains nameless in the book) has never truly mourned for his parents and does so at the end of the book. Ultimately, at the end, he comes to peace with his situation. 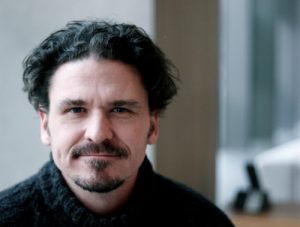 This is a wonderful, thought provoking book. It is both funny and touching. The writing is very different from anything I have seen before and will, at times, wander from the path. But it is still interesting and pertinent to the story because we can look into his mind. There is also the question of the odd character references. Some characters are more important than others with no real explanation as to why they are in the book at all. The reader has no idea why they are there until the end, when the author explains why (which is brilliant and makes the story truly come together). The style also captures how the narrator sees things only from his perspective (self-centered as the young tend to be) using dialog from the writers perspective, not the perspective of the character (a seven year old does not have the reason to debate like Toph does. This is the author debating himself when Toph introduces questions about the author’s action.

A wonderful book Worthy of being in Amazon’s top one hundred. I rate it 5 of 5 stars.