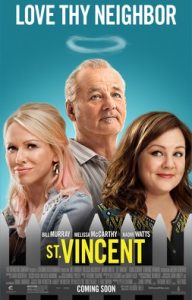 When I came up St. Vincent and saw that Bill Murray starred in it, I thought this might be something I would like. The movie came out in 2014 and stars Murray, Melissa McCarthy, Naomi Watts and Jaeden Lieberher. It was written and directed by Theodore Melfi. It received high marks from rottentomatos.com (78% liked it). 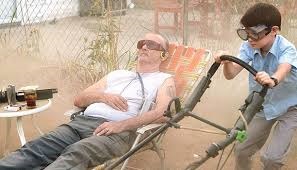 The movie is about Vincent (Murray), a grouchy, old Vietnam vet with rather loose morals (gambling, drinking and his “girlfriend” is a pregnant hooker played by Watts). Just as his life seems to be in the tank, he meets his new neighbors: a single mother (McCarthy) and her little boy, Oliver (Lieberher). The boy is a small child who is frequently bullied but is very intelligent and has a big heart. When the child is locked out of his house while his mother is working, Murray takes him in and, since Vincent has no money, offers no babysit Vincent. Well, just because Vincent is taking care of a child does not mean he is going to change his ways. Vincent brings the child on all his daily activities. Though not the best for a child, Oliver actually learns about life. As he continues to hang out with Vincent, he learns that Vincent is not the man he appears to be.

This coming-of-age movie starts out as a very funny comedy. Slowly, it transform into a very emotional drama. I was actually choked up in the end and I hate dramas like that. Murray was brilliant. Even as he played a real jerk (and I mean a REAL jerk) there still was an emotional attachment to him and I could not help feeling sorry for him even though it was very obvious he created his own situation. As the movie went on and you saw the real person that Murray played, sympathy began to take hold and I was emotionally involved. No matter how much I hate emotional dramas, there was no way I could stop watching.

McCarthy also played outside what I had seen her play before. She played the jilted single mother very well and it was easy to for me to go beyond the flippant ditz that McCarthy played in most of her roles (this role also makes me forgive her for the new Ghostbusters). This movie showed that McCarthy can take on serious roles. Watt has always been a good actress (or is the political correct term “actor? I don’t know. Whatever). Between the worn out look of a beaten up hooker/stripper and the seedy role, I did not figure out it was her until half way through the move. As far as I am concerned, this movie is just more proof she is a good actress.

This was a great movie. Not for kids (too much explaining to do). But if you want to watch something with the wife or girlfriend, there is enough emotion to be considered a chick-flick for her and enough comedy to keep the man engaged.