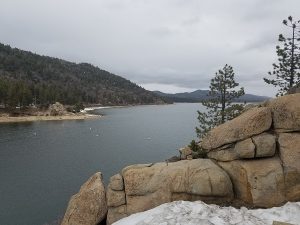 To my relief, we never needed chains. In fact, the car we rented was already all wheel drive and we did not even need chains. But I did not know that at the time. All I did for the first few minutes is check the road reports and watch for the Highway Patrol to have a checkpoint and ask to see our chains. The stress was exasperated by the fact we had to sit in traffic because of an overturned car. I watched the roads, tensing every time I saw a dark patch on the road, wondering if it was black ice, fearing we would slide off the embankment and off the ledge of the cliff, killing all except Josie and me. Of course Josie would survive. That way she could spit guilt at me for killing her kids and ruining our vacation.

Alas, my fears were unheard of. We never needed chains (and were not required to have them in the first place). The only thing I needed to worry about was my ears popping. My right ear was throwing a fit. It was killing me. We started at 1000 feet of elevation and, before we knew it, we were at 4000 feet. I did everything. Yawned, clenched my jaw, Pinched my nose and blew; none of it worked. Finally, I just let it go and waited. Sure enough, my ear popped. It was glorious!

When we got to 5000 feet, the world changed. The air got cold (under 40 degrees), snow was on the ground and cars were coming down, covered with snow. The weather was very iffy. Not only was it cold, but there was a heavy sprinkle and foggy. But it was beautiful. The hills were covered with snow freckled with tall, dark trees. Every once in a while, we would pass a cabin nestled in the hill or a small town offering food, ski rentals and chains (damn, there are those chains again). 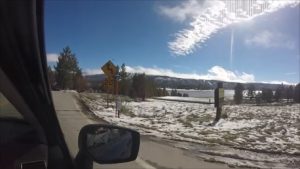 We got to the cabin but was an hour early and it was still being cleaned. Josie needed to use the restroom and had been holding it for some time. We decided to drive into the town of Big Bear and find a restroom. We stopped at three places and failed to find a restroom. Well, that is not completely true. One had the men’s room available and Josie got permission to use is, but she refused. We headed back to the cabin. 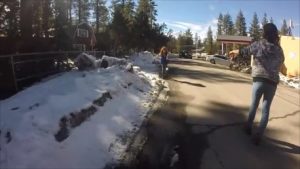 The kids and I unloaded the car while Josie relieved herself. And she must have been suffering because we put all the stuff away before she got out (or maybe she planned that way, who knows?). After we put the stuff away, it was time to inspect the cabin. It was nice. Very rustic (what I mean by “rustic” is that only half the didn’t lights worked and it was cold). There were two bedrooms, one bathroom (again, a disaster with four ladies in the house) and a loft. The amenities included a full kitchen (with utensils), a fireplace, television, backyard and a grill (which we never used because it was too damn cold).

We had hot dogs and built a fire. The iron thing that holds the wood was not under the the part of the chimney part where the smoke goes through (not feeling like looking up the terms. Too lazy). So the smoke wafted into the cabin and set off every smoke alarm. I tried just resetting them but they kept going off. I finally took two smoke detectors off the ceilings. I also figured out to move the iron-wood-holding-thingy under the chimney-hole-thingy. Little late. The cabin smelled like smoke for the rest of the trip. 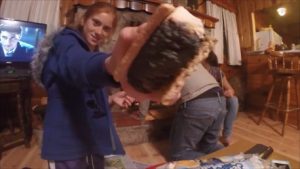 We had fun. Josie and I talked and the girls played. We has popcorn and I let the girls use my Samsung Gear VR. They used the “Face Your Fears” app. Their reactions were awesome (I will review that in a later blog post). Of course, we had to make Smores. Now, I have never been a huge fan of Smores. But these things were good. Or maybe they were not. Maybe I just liked setting marshmallows on fire. Might be time to visit my psychologist again.

In short, we did nothing and had the greatest time. We were in a beautiful part of the state of California. And we were having fun.