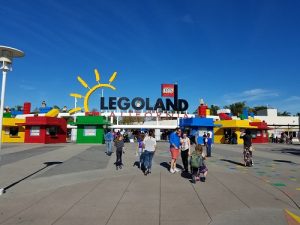 Josie, my girlfriend, used to work at Legoland in Carlsbad, California. She made some really good friends there, including her old boss. She is always looking to do things with her kids and decided it might be nice for them to go spend a day there. So she called her old boss and asked for free tickets (we were not at all interested in spending $80 a person to go). After a few months, she finally got the tickets and she set a date.

Now, a little history. I have not been to Legoland in probably ten years. And , as I remember it, I did not have a good time. There was only one good roller coaster and everything else were kid rides and stores. I do remember I liked looking at the Lego buildings. So I was hoping that things had changed over since I had been there last. Josie assured me it had not. 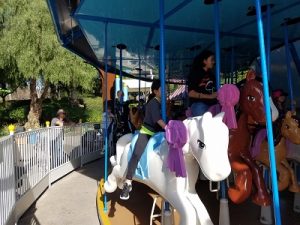 We arrived at ten in the morning. Josie was not thrilled. She had secretly planned to be there for three or four hours and then leave. I understood her feelings. After all, she had worked there for more than five years. It is kind of like the excitement one might feel going to McDonald’s for a Big Mac after working eight hours on the grill in the back.

The first ride we went on was a “family” roller coaster. What does that mean? A “family” roller coaster does not go very fast and is not very long. Even this little snoozer of a ride scared Josie’s oldest girl (she is not very adventurous). That meant we were going to be limited on what we could do. But it did not really matter. There were not a lot of thrill rides at this park. 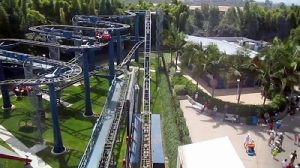 Some of the wilder rides were actually closed. There was Technic Coaster. This is a ride where you site in a car, go very high and take sharp turns (this makes to feel like you are going to tip over and fall. It is actually quite frightening). The Technic Coaster was closed and I do not think it ever opened.

Then there was The Claw. This is a ride where you are tied into a seat that is attached to the end of an arm. You can choose the intensity you want and then the arm will jostle you every which way. I was looking for some excitement so I chose the extreme intensity level. The girls chose the moderate level. I made the mistake of not putting my phone away and I thought I was going to lose it. We were thrown every which way. If I had any change, it would have been on the floor. It was fun but my back was a little sore after. 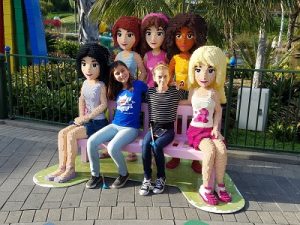 After that, we went on (well, when I say “we”, I mean the kids went on) assorted little rides. But the best part of the day for me was walking through Miniland. This section of the park was made up of models of cities built all from Legos. There was New York, Los Angeles, San Francisco, Las Vegas just to name a few. It was amazing.

There was also the Star Wars exhibits. It was made up of all the characters and some of the scenes from the Star Wars movies all built out of Legos. There were full size statues of Chewbacca and Darth Vader, all built with Legos. The grand finale of the exhibit was a model of the Death Star with moving star fighters included. It was a very impressive. 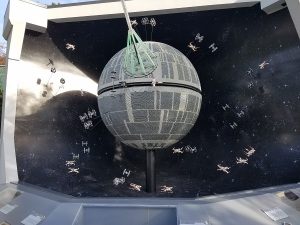 We were all getting tired and home was beginning to sound like a great plan. Our final stop before exiting the park was to the aquarium. I did not know this but Legoland was responsible for saving over a thousand ocean animals who were in trouble. They also took in animals from other aquariums for breeding purposes. The aquarium was impressive. The stars of the show for me were the sea horses. They had dozens of them. Their main tank had the typical fish you would expect to see including sharks. What made it different was the different views you could view from. They even had bubbles that children could stick their heads in to get a 360 degree view.

Overall, we had fun. I would have wished they had more exciting rides, but this was for the kids and they were not big roller coaster fans. I do not know if it is worth the price of admission but I was glad to go and see the amazing structures. For a view of those structures, watch the video below.