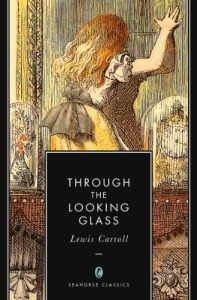 I am going through Amazon’s list of “100 Books to Read Before You Die” and “Alice’s Adventures in Wonderland” was one of the books on the list. I have actually wanted to read this book because it was written by Charles Lutwidge Dodgson (aka Lewis Carroll) who is a mathematician (more on that later).

So I downloaded the book. It only took me a couple of hours to read it and I noticed that this book had nothing to do with Disney’s “Alice in Wonderland” movie. I became suspicious but decided to read on. Well, it turns out that I read “Through the Looking Glass” and not “Alice’s Adventures in Wonderland”. I was ticked that I could not mark that book off my list. Instead of suing Amazon for $400 million dollars in a class action, false advertisement lawsuit, I decided just review this book and read the other next. 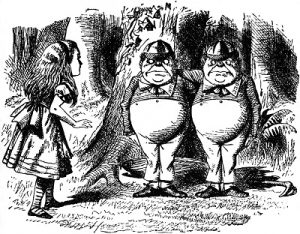 As I have said, I always wanted to read Lewis Carroll’s work. There is some confusion. A lot of people believe that the Carroll books are written because of his drug addiction to opium. Actually, he was a mathematician and Wonderland is a look into a different dimension than ours and how we might interact with the “absurdity” within that dimension (at least that’s what I learned in college). If you want to read great Nineteenth Century literature by a drug fiend, read Edgar Allen Poe (he was an alcoholic and it was what probably killed him). I have always been interested in alternate dimensions and physics. I thought it would be a fun read. 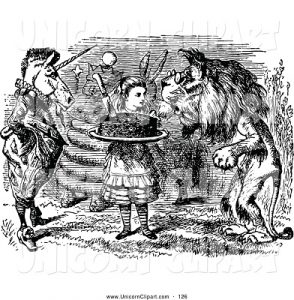 The book is the second and final book in the Wonderland series and was written in 1865. It is currently being made into a movie starring Johnny Depp (which is odd because the Mad Hatter, Depp’s character, isn’t in the book. Don’t expect a true-to-the-book version of the movie). 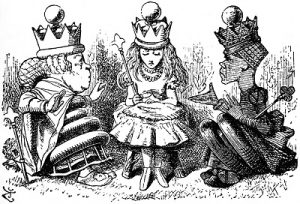 The book starts with Alice playing with her cats in a family room when she is staring into a mirror. Curious as to the world on the other side of the mirror, she walks through and enters that world (yep, it’s that simple). She is in a land that takes the shape of a chessboard and she finds that she is a pawn in this world. Her goal is to walk across this world to get to the other side and become a queen. On her journey, she meets with the other chess pieces (the Kings, Knights and Queens), talking flowers and animals. There are some of the characters from the first book (Tweedle Dee and Tweedle Dum), but, for the most part, all the characters are new. 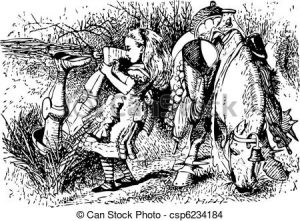 This is a very entertaining book albeit difficult to read at first. It is difficult in that one must let themselves go of reason and read what is written, no matter how absurd it is. The characters just appear and the behavior and dialog can be hard for the reasonable person to picture in one’s mind. The book reminds me a lot of Eugene Ionesco’s “Rhinoeros” which was an Absurdist play of the 1950’s (I can’t believe I still remember that from college). 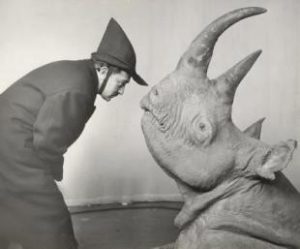 But, overall, the book was fun and easy to read (though Alice could be a bit whiny). The play on words were very entertaining and memorable (example: it is rude to answer a door when it does not ask a question). Carroll’s writing was very clever and kept the reader going. At 141 pages, it is also a quick read.