That title is a little misleading. I actually hate Los Angeles. There are too many people, too much traffic and it is way too big. But I do like the song, so I decided to use it in the title. And that’s what I did this past weekend. I usually don’t like to go to L.A. more than once a month but I had several reasons that made it a requirement to go.

First reason was my parents are moving. My father is in his mid-seventies and I knew he would get tired quickly. I was also informed by my step mother that he was driving her nuts because he was not cleaning his office. She showed me on Thanksgiving and I could not believe the mess. I half thought an intervention might be needed to get him to throw something out. Next reason is because it was my step mother’s birthday. They have done a lot for me and I do not have the heart to turn them down. My father would be disappointed. My daughter was going to be there and I wanted to see her since she has finally developed a baby belly. And, finally, Josie wanted to go. We would have our own room and things could be a lot of fun (if you know what I mean). 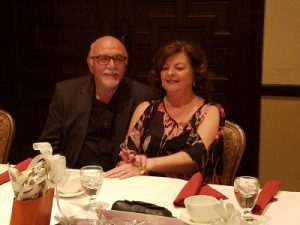 I bought two Amtrak tickets that would take us to Union Station in downtown Los Angeles. We walked to my car the morning we were going to leave. That is when Josie said we should walk to the train station. It was only a mile away and we would not have to pay to park the car. So I thought that was a good idea.

Now, Josie has a very odd stomach. It is solid as a rock when we are at home. But the second she walks outside, it always seems to begin to rumble (and usually when there is no restroom anywhere in the vicinity). Well, the long walk, nerves about riding the train and the large coffee she bought (I’m sure the four creams also helped) had loosened things up. She needed a restroom and it was early enough that nothing was opened. She complained all the way to the train station. Of course, she would not use the restroom at the train station (for obvious reasons) so we had to go to a coffee shop. I could not blame her though, those restrooms at the train station look like something out of a prison. I bought a coffee so she could use the restroom (customers only) and forty-five minutes later we were good to go.

The train ride went well. Josie did not get motion sick (which she did on the Coaster. You might remember in an earlier post. The one where I spelled her name “Josey”), in fact, she fell asleep. I wanted to fall asleep but I had to get that coffee so Josie could use the restroom. I was wired. I watched “Suicide Squad” on my phone (I’ll review that one later). We got to Los Angeles on time and took an Uber to my parent’s house. 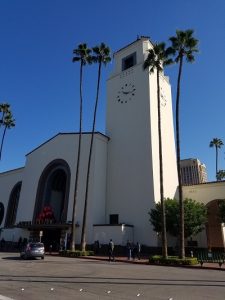 Josie was still tired and I thought we would get the chance to take a power nap. I was also a tad hungry and wanted to grab something to eat. That was not to be. My step sister and parents were already tearing the house apart. I went to my father’s office and started working on that mess. My God, he throws nothing away. I got into a minor argument with him about throwing away ten empty binders. He said he hated throwing them away because he never knew when he would need them again. I told him to toss them and buy a new when when he needed one. This did not move him. I just gave up. I was staring at the clock, hoping noon would come around so I could have a beer. I knew I was going to need it.

Six hours later, we were finished. It was time for a shower and get dressed. Josie dressed in this sexy, tight green skirt and black halter top. She was a little shy with how much cleavage the top showed so she would not take off her jacket. Also, I was heartened to hear that my step sister and Josie were getting along. Upon the advice of my step sister, Josie decided her dress was too tight to wear underwear. She took them off…NICE! Problem was, with her top cut low and no underwear, she decided not to take her coat off throughout the night…Ugh! 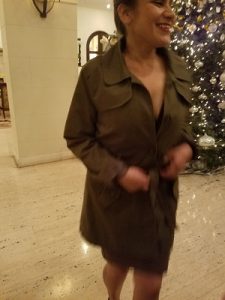 We went to the Rivera Country Club for dinner. Josie was shocked that I truly was a rich white boy (though I am not rich, my father is). We shared a twenty-two ounce handcrafted (how do you handcraft a cow?) ribeye steak. Josie wanted it like I do, extra rare (I love that woman). We also had salad and calamari. The wine was so smooth. I will not lie: I saw God.

After dinner, we had cake and took pictures. Josie and I took a great one which is below. She looks great, I look like an ogre. When we got back to my parent’s house, we went to bed (and that turned out well too). 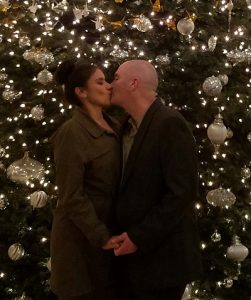 The next morning came a long and we packed up for our trip back to San Diego. Well…have you ever seen a movie where the bag starts vibrating and it turns out to be a sex toy? And the embarrassed main character had to explain to the stranger what was actually making all that noise? Yep, that’s what happened. When we heard the noise, we searched, looking for it. My step mother walked around, hoping that something else had not broken before they sold the house. Josie and I both looked at each other in horror when we figured out it was coming from my bag and what was making that noise. Thank God my step mom is progressive. She asked if it was a vibrator and I timidly said yes. She just advised me to take the battery out next time and off we went to Union Station. 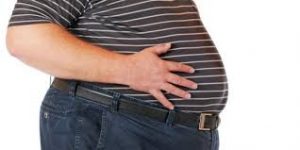 The story should end right here except…well…now I am on a diet. Josie told me I had a belly and I should lose it. Nothing but water, fruit and oatmeal for me this week. I won’t lie, it was a small price to pay for the great food and drink this weekend. I know Josie had fun too. She is looking forward to going to my daughter’s baby shower now (God, I hope there is a bar where we are going).