I get bored when in the car. I always look for something to do, even when driving (though I don’t recommend doing that). I discovered a game that made driving interesting, was fun and involved my favorite card game. I needed to master the rules before actually introducing the game and actually try it out on Josie’s kids (and, it turned out, Josie got a kick out of it too). 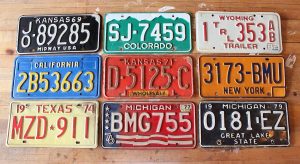 It is called License Plate Poker (catchy name, huh?). It combines the fun over poker with the need to kill time in a car during a long (or what may seem long) ride.

Here’s how to play. You are driving and each person in the car must find a license plate with a good poker hand. The driver, who obviously should not be playing, counts down (in fact, the driver should be the referee here). When the driver decides to call for a hand, the riders call out there complete hand. The person who has the best hand wins and gets a point. The driver then waits for a bit and starts over and counts down. When the destination is reached, the best hand wins. Nice, huh?

Now, there are some rules (but these can be modified by you). First, the is an honor system thing. One can make up that they saw a plate. Take her at her word. Next, there is very little different between “O” and “0” on a license plate. Treat them as the same since they are really hard to tell them apart. Letters are stronger than numbers. The number (letter) “0” can be at the beginning or end of a number sequence and still be the letter “O” (up to the person using the plate). Finally, the order of the best hands:

The order above can be changed. I have founds straights are actually very hard to get because most plates have a mix of letters and numbers. The big thing to remember is that the rules are up to the driver. I have changed the rules every once in a while just to mix things up and freshen up the game.

Take a look at the pictures before and see if you can figure out what the hands are on the license plates. If you do not understand how I came up with the hand, just leave a comment and I will reply with the answer. 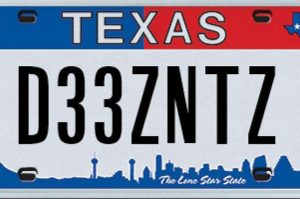 Four of a Kind

Get it? Pretty straight forward, right?

Want to introduce the game to your kids, simply look at license plates and say, “Nothing, pair of A’s, nothing, nothing, two pairs.” About two minutes after you start, they will be asking you what you are doing and tell them. They will start looking and reporting what they see. But, watch out. The notification of finding a great hand can be rather loud.

Try it and have fun.