I felt like something a little different last night so I perused through the PlayStation Store and found “The Autopsy of Jane Doe”. I was not thrilled about spending money on a movie, but the premise looked promising. Now I am cheap so I wanted to make sure I got the biggest bang for my buck. I looked up the movie on RittenTomatoes.com and found that it had an 86% rating.

That did it. I bought the movie.

The movie “The Autopsy of Jane Doe” was released at the end of 2016. It was written by Ian Goldberg and Richard Naing. It was directed by Andre Ovredal. Brian Cox (Tommy), Emile Hirsch (Austin) and Olwen Kelly (Jane Doe). Yes, the dead person had a starring role and, yes, all she did was sit on a table, naked. But she is hot so I figure that is why they gave her high billing.

The movie starts with the police investigating the murders of three people. The circumstances of the deaths is very suspicious. Two people in the house died violently but with no explanation and the nude body of a young woman is found half buried in the basement with no apparent violence done to her at all. All the doors and windows were locked. Just creepy and weird. 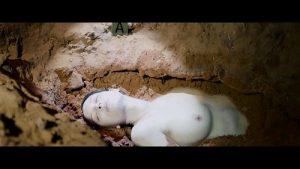 So the police decide they need an autopsy right away on the girl right away to figure out what happened (believe it or not, the other two mutilated corpses could wait). The body is brought to the small town’s makeshift morgue where Tommy (the medical examiner/mortician) and his son, Austin (who is learning the trade) start to work on the body. They find some weird injuries but nothing that explains her death. As they start to cut her open, what they find is more bizarre and that is when strange things begin to happen. 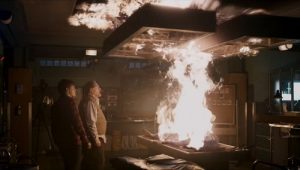 This story is creepy. The house is creepy. The morgue is creepy. The corpse is creepy. Heck, even the house cat is creepy. The atmosphere made things far scarier when everything went south. The acting was great. It was fun watching the analytical pair deal with all the illogical findings and then try to keep their sanity when the bumps-in-the-night started happening. Olwen Kelly was awesome too even though she was simply naked on a table (she only moved once the entire movie).

It was a well made movie. I know the creep factor was not intentional. It kept me watching. Believe it, most of the movie was surrounded around the actual autopsy. The bad thing did not happen until the last quarter over the movie. But it was far from boring. I suggest you rent this movie.