Being in Los Angeles to visit my grandson gave me the opportunity to show Josie parts that she had never seen before. I had the whole thing planned out. We would go to Palisades Park for a short run. The views are really nice and the running paths are very soft on the feet. Then we would go to the Promenade and the Santa Monica Mall for a little window shopping. Not only would she enjoy the stores but she would get a kick out of all the strange people that inhabited Santa Monica. Finally, we would go to the Santa Monica Pier which had rides, great food and little knick-knack shops that I new she would enjoy.

But Josie had other ideas. She wanted to go to the LA Fashion Mart in downtown Los Angeles. I looked at her with uncertainty. I told her the area was very iffy and it was not as great a place as she was led to believe. In fact, I had only been there once and was pretty sure I would never go again. Well, you know what they say: “Never say never”. With that, we were off to Downtown L.A. 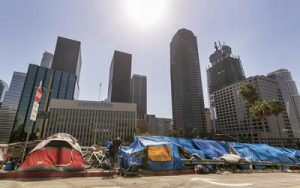 When we got off the freeway, the first thing Josie noticed were the lines of tents along the sidewalks. She asked me about them. I told her that is where people lived. She had never seen anything like it. I simply said, “Welcome to Downtown L.A.”. She seemed a little less than amused. She was less so as she had to deal with the other drivers. I have never heard such language out of a woman (it kind of turned me on). Then, parking. Oh, Lord, parking. We did get lucky and found a spot a block away from the mart. Josie had to parallel park (which she is good at) but became irritated with the drivers honking behind her. 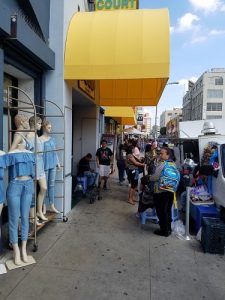 Josie’s first impressions were less than favorable. She could not believe how dirty things were. She was a little surprised when I told her the city had actually cleaned up the area. She became completely disillusioned when she saw the Fashion Mart. She gasped and exclaimed “It looks like Tijuana!”. I nodded in agreement. We walked around for about an hour. The sidewalks were thin and the “shops” took up half of them. We did not eat anything except for a lemonade with chia seeds and cucumber (it was actually really good). I wanted a hot dog with bacon wrapped around it but Josie would not let me have one (something about ecoli and dying before I transferred my life insurance to her). 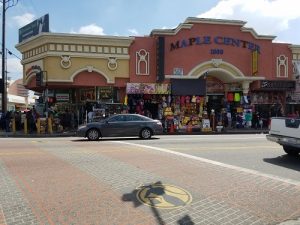 Josie had enough. Dirty, too many people, too hot and nothing interesting to buy. She did not even find something for her daughters. I needed to save the day. So we went to Olvera Street. I could not spell it so entering it in my GPS made driving around L.A. interesting. I kept pointing out the sights while I Googled the spelling. Josie was not interested.

We finally found Olvera Street but we did not find parking. Things just kept getting better. 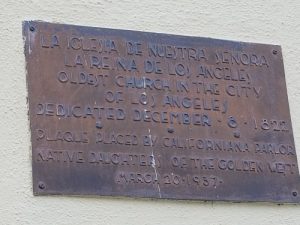 After finding parking, we visited the oldest church in Los Angeles: La Iglesia de Nuestra Señora la Reina de Los Ángeles (that’s a mouthful). We took a peek inside but mass was happening so we could not walk inside. 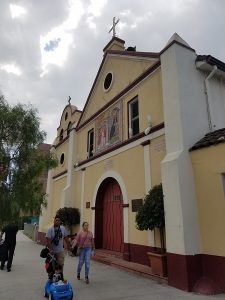 Behind the church a group of people were performing a native dance with drums (not sure which natives, Mexican, Indian or both). They danced for at least two hours straight. The guy in the outfit above really got into it though he did not look like he was in shape for it. I was hoping I remembered my CPR.

We then walked across the street to Olvera Street. This is just a group of shops. A lot cleaner than the Fashion Mart but just as crowded. Josie went from store to store, looking for something for her girls. She saw that every one was basically selling the same thing. her big purchase for the girls was two small barrels of slime. We searched for the cheapest price since every cart had them but each had a different price (that added thirty minutes to our trip but at least we only spent $3.00 with no tax). 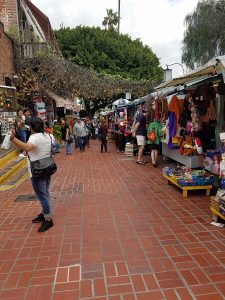 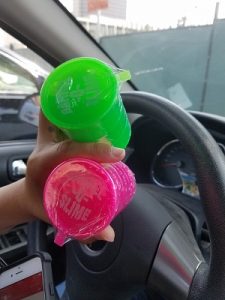 Josie was not impressed with downtown Los Angeles (I knew she would not be). I did not hesitate to tell her, “I told you so”. I am pretty sure the next time I write about a trip to Los Angeles, the Santa Monica Pier will be the subject.