It was my birthday on Monday. I took the day off but did not have anything specific planned. Well, I was going to hang out with Josie, but, as you know, we have had some issues, so I really was not sure if she was going to hang out with me. I was not thrilled about it but it was what it was. I was pleasantly surprised to hear that she wanted to go running with me in the morning. So I got up and we ran together.

After our run, she said she was busy. She knew I was disappointed, but that was part of her plan. I my way home, I got a text telling me to be ready in an hour. I was happy. I took a shower and got dressed. I wore jeans, T-shirt and tennis shoes. I thought we were only going to run errands. When she came, I saw that she looked awesome. She glared at me, wondering why I was dressed so casual. I ran and changed into something a little more presentable. I even put on a little cologne.

Off we went. Had no idea where we were going. He GPS said we would be there in an hour. It was half way up the 15 freeway that I realized where we were going: Temecula. She was taking me wine tasting. I was excited. I had never been (neither had she which is a surprise since she loves wine). 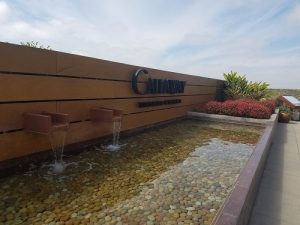 First impression was wow! I did not realize there were so many vineyards in Temecula and they were all next to each other. Just fields of grape vines. We stopped at Callaway Vineyard. It was the largest in the area. It was also the nicest. We went in and bought twelve tickets. Each ticket permitted us one one ounce sample of wine. I am a huge fan of red wines. I had the Zinfandel, Cabernet and Pinot. Josie loved the rose wines (she loves sweet wine).

We had our samples and I fell for the Zinfandel (I am going to order some online). Josie found the rose she liked. The wine was very strong, much stronger than the store wines we usually drank. So we were feeling a little light-headed. We decided not to use the other six tickets. The server said we could use the last six tickets to just buy a glass of wine and have it outside. We did. 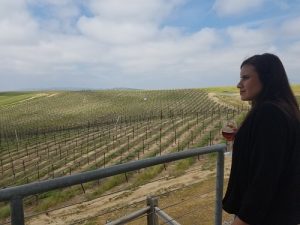 The day was beautiful. Clouds in the sky and cool without being cold. We looks at the wine fields. It was wonderful. We sat for probably an hour just talking. We both knew that our wine-tasting adventure was over though. We were getting tipsy (the wine was a lot stronger than we were used to). We stopped for lunch and called it a day.

This was one of the nicest birthdays I have had in a long time.